Leaning Back, Listening, A few More

My man Riv messaged me the other day, “what’s up with you? you haven’t updated your blog recently.” He’s right, I took a big break. I think I’m about ready to come back to the game.

After my resurrection, I had high expectations. After a year off from game and some time in a long term relationship, I figured I’d bounce back to where I was when I left off. I jumped in, and worked hard. Had a date here and there… but my stats were miserable, and seemed to be getting worse. I was going thru about 100 approaches a month, minimum, with maybe 1 date a month to show for it. Basically no repeats. A sea of phone numbers to no where. I was doing it wrong.

I am going to write more about what I think was (is?) going on soon, but for now, let’s just say that I decided I need to “lean back” at every level. Tactically and internally… lean back, daygamer, lean back. I think that time helped. Things feel a little better now, like I’m starting to loosen up. Thank you, Baby Jesus.

I do NOT want to lose this skillset, so I did do some sets in the last few weeks… mostly out of principal that I wasn’t hiding and that I expect this to be a part of my lifestyle going fwd. 16 sets in a months… vs 100 in previous months. I had other stuff going on w/ girls, but this was my daygame effort this last month.

Here is my favorite interaction of the bunch below… a recent one.

I was trying to get a couple of sets in before I had a tea. She walked by and was my type. I follow her up the street a bit and open. She’s a young Asian girl, cute, girly style. She’s a bit alarmed, defensive. She slows down, and does stop, but her body is turned away from me, almost w/ her back to me, she’s cautiously looking back at me over her shoulder. As I started the chat, she, slowly, turned, toward me, until, we, were, facing each other… like normal grownups. It was funny. Kind of like talking to a 3 year old (which I do a lot, little kids are great training). I could tell I was doing well as she relaxed.

She was from Taiwan, here in the US for about 6 weeks. As she settled down, we had a good chat about SF vs Asian. She made this great point about China… saying she loves that place because it’s growing so fast, it’s different every time she goes. She likes that. I liked her. It has been a chilly/foggy summer here, and she had goosebumps on her neck as she shivered a bit in the evening breeze. I wanted to bite her, she looks soft and tasty. I tried to get her to insta-date, but she had stuff to do. I took her number and then grabbed a tea by myself.

I waited 3 days to text her, which is unlike me. I don’t know that that matters, but I’m training myself to lean back… so I took my time. My sister was visiting, I have been doing some online dating. I’ve been busy with new clients, it wasn’t hard to lean back. I pinged her for a date to the art museum. She replied a few hours later, affirmative, telling me when she was free.

The date happened. More on that later. Another date happened too. She’s cute, smart, attractive girl. We are having fun together. Good daygame score.

For the record, here are the rest of the sets..

2. Middle Eastern office girl. Opened her, she drifted past me, but then she came back and shook my hand. I remember that she was tempted. I got real with her pretty quick. I watched her think about it, the gears in her mind turning, but ran off. Smiling as she went.

4. Asian girl. My notes say “flapped my arms… why didn’t that work??? Ha.” I remember that one… I didn’t stop her well, trying to get her attention from the side. That’s what the “flapping my arms” thing means. I bet I was like “Hey, hey…” She wasn’t having it.

5. Asian girl near the Apple store on her phone. I accused her of playing pokemon go. She was flat, but chatted for a bit. Boring. She was no fun, not into it. I bailed.

6. Fancy Asian girl. As I opened saying she caught my eye, she apologized, which made no sense. It was awkward. I bailed.

1. Chinese girl, she started out concerned, then warmed up a bit, loved it, but had to go. I wrote “no attachment!” in my notes. I think this was me trying to get the “leaning back” bit.

2. Lovely, ran away. I don’t remember this girl… but this note makes me laugh. That’s the story of so many men/women, right there.

3. Chinese girl, wild orange dress, wasn’t into it. She couldn’t understand a word I said, but I could see her “get it,” and smile as she peddled off.

4. Short girl, ponytail, very social, long talk, had BF. Don’t remember her either. These notes are old. Sounds like I had a good time w/ this one, though.

1. I love this one… As I opened her, I said “Hey, you caught my eye…” and she cut me off, arguing “no I didn’t!” I laughed. I’ve never had a girl argue about whether she caught my eye. I tried again, I told her, “yeah, you caught me eye and…,” she was backing up, mildly alarmed, still telling me “No I didn’t!” I’m glued to the sidewalk, she’s still walking off, looking back at me. Ha. Whatever. I think she thought I meant that we had eye contact, and she’s right, we did not, but that’s not what I said. Ha. 1000 girls… never had a girl argue with me on the open before.

2. She was a tall, white girl, nice full ass, probably Russian/Ukrainian?? She had amazing sapphire eyes… that’s why I went after her, I wanted another drink of those eyes. She smiled right away, liked it, but never slowed down. I planted my feet and she walked off.

3 Asian girl, didn’t stop, wasn’t into it. I vaguely remember her…

4. Big headphones on her head, Eastern European, powerful walk. I was planning on teasing her about the walk. As I jumped in front of her, she acted like I was crazy and sped up. Ha.

5. This is my favorite set from ABOVE… cute Taiwanese girl.

6 This one… very little Chinese girl. 5 footer, so cute. For some reason I assumed she’d panic, but I opened her and she was a pile of fun — goes to show you never can tell. , Paris, cute, FB… No time to date. 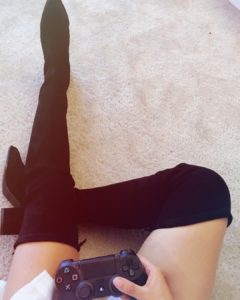 3 Responses to Leaning Back, Listening, A few More